Foster + Partners have revealed a new design for a timber boathouse on the Harlem River in New York. Sited in Sherman Creek Park, the design was made for non-profit Row New York. The proposed boathouse seeks to expand Row New York’s free and low-cost programs that teach young people in under-resourced communities the sport of competitive rowing, while also assisting them with their education to prepare them for higher education and a path to college.

Founded on the belief that the skills learned in rowing are essential to the development of well-rounded individuals, Row New York offers a competitive rowing and academic success program to students from underserved communities throughout New York City. Located on the banks of the Harlem River, the project seeks to transform the lives of people in the local community, giving young people a sense of self-confidence and purpose, inspiring them to achieve their full potential. The expansion will enable Row New York to substantially increase its reach, accommodating up to five times as many students, including those with physical and cognitive disabilities and bringing all its activities under one roof for the first time.

Norman Foster, Founder and Executive Chairman, Foster + Partners, said: “In envisioning a design for a boathouse that will serve a diverse population and be a resource to the community at large, I wanted to create a building that was both functional and accessible, but also one that responded to the Hudson River’s long history as a busy transportation hub. This timber boathouse will fit naturally into the landscape of the riverfront and will transform this stretch of the Harlem River into a lively gathering place for people from all communities.” 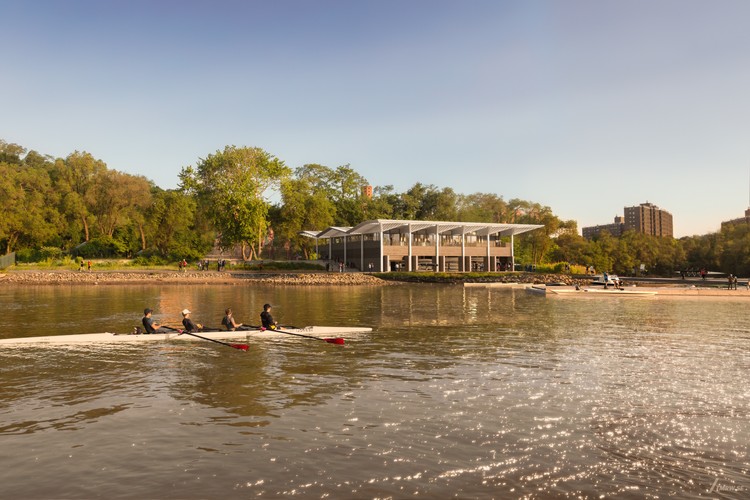 The new Harlem Boathouse recalls the 20th century tradition of timber row-houses with a simple rectilinear structure made entirely from wood. As the team said, the new building is fully accessible – a plaza foregrounds the building, from where a gentle folding ramp extends to the upper and lower levels of the building. The lower level contains an expanded storage for boats, which is designed to withstand severe flooding events, while the upper level features a large multi-purpose hall alongside changing rooms and classrooms for after school programs. This flowing space on the upper level opens onto a wide terrace on the building’s eastern edge, looking onto the river – framing views of early morning sunrise as the rowers begin the first sessions.

The new 1,600 square-feet facility will co-locate boat storage, fitness, and academic functions in one building on a new site, creating an integrated community space that uses rowing as a facilitator for several other social activities – from an outdoor cinema to financial literacy classes. The boathouse design is shaded by a large folding timber canopy that sails over the structure, cantilevering over the plaza and terrace and providing shelter from the sun. Its distinctive timber lattice is a fusion of engineering and design, providing shade to the flexible multipurpose waterfront open space – a landscaped area designed for informal leisure activities as well as community events and performances. The boathouse aims to transform this stretch of the Harlem River into an arena at the heart of the community, furthering the wider social and educational aims of Row New York.